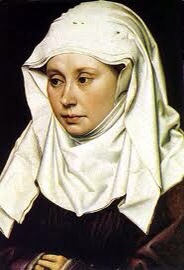 Marguerite Porete was a French mystic and the author of “The Mirror of Simple Souls.” It is a Christian Spiritual work concerning divine love. When she refused to remove her book form circulation and recant her views she was burned at the stake as a heretic in 1310. Little is known of her life except through her trial for heresy and it is certainly biased and incomplete. She has been a rather obscure figure until recent years as until 1946 her work had been published anonymously since her death.

Porete was officially warned by the Church that her works were heretical and they were publically burned by the Bishop of Cambrai. She had written her book in Old French as opposed to Latin and was ordered not to circulate her ideas ever again. She was eventually arrested by the local inquisitor. Twenty-one theologians scoured her book for evidence of heresy. In the end three bishops passed final judgment on her. After a year and a half in prison in Paris her trial began. She refused to recant her ideas or cooperate with the authorities. Because she did not recant she was found guilty and burnt at the stake. As she died the crowd is said to have been moved to tears by her calmness.

“The Mirror of Simple Souls,” is an allegorical conversation between Love, Reason, Soul, and Truth. It deals with Porete’s belief that when the soul is full of God’s love it is united with God and in a union which transcends the contradictions of the world. In this state one cannot sin because the soul is united with God’s will and incapable of such. A few quotes:

“O Truth, says this Soul, for god’s sake, do not say
That of myself I might ever say something of Him,
save through Him;
And this is true, do not doubt it,
And if it pleases you to know whose I am,
I will say it through pure courtesy:
Love holds me so completely in her domain,
That I have neither sense, nor will,
Nor reason to do anything,
Except through her, as you know.”

“Theologians and other clerks,
You won’t understand this book,
— However bright your wits —
If you do not meet it humbly,
And in this way, Love and Faith
Make you surmount Reason, for
They are the protectors of Reason’s house. ”

“God has nowhere to put his goodness, if not in me no place to put himself entire, if not in me. And by this means I am the exemplar of salvation, and what is more, I am the salvation itself of every creature, and the glory of God.”
~ Marguerite Porete