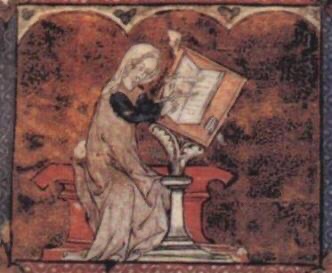 Very little is actually known of Marie de France as both her given name and where she lived is only known through her manuscripts. She was a medieval poet who probably was born in France and lived in England in the late 12th century. She lived and wrote at an unknown or undisclosed court, but was at least known of in the royal court of King Henry II of England. Some have suggested that she was perhaps a half-sister of Henry II.

She wrote a form of Anglo-Norman French and was proficient in Latin and English as well. She translated “Aesop’s Fables” into Anglo-Norman French from Middle English, and the “Legend of the Purgatory of St. Patrick” from Latin. She is best known as the writer of “The Lais Of Marie de France” which are still quite widely read and were a great influence on the romance genre (heroic literature) such as Chaucer’s “Canterbury Tales.”

“The Lais of Marie de France” are a series of twelve short (a few hundred lines each) Breton Lais. They are rhymed stanzas of 6-16 lines with 4-8 syllables per line which focus on glorifying the concept of courtly love through the adventure of the main character. The series of lais presents a contrast of the positive and negative actions that can result from love through magical situations, themes and imagery. Romantic themes include lovers in a hostile world, oppressive marriages and dichotomy social conventions, conflicts between love, chivalry and marriage, freedom of desire, love as an escape, and the psychological issues of love manifested in treachery and selfishness. They are also considered to have an ambiguous moral message especially for the time.

“Love is an invisible wound within the body, and, since it has its source in nature, it is a long-lasting ill.”

“Anyone who intends to present a new story must approach the problem in a new way and speak so persuasively that the tale brings pleasure to people.”

“It would be less dangerous for a man to court every lady in an entire land than for a lady to remove a single besotted lover from her skirts, for he will immediately attempt to strike back.”