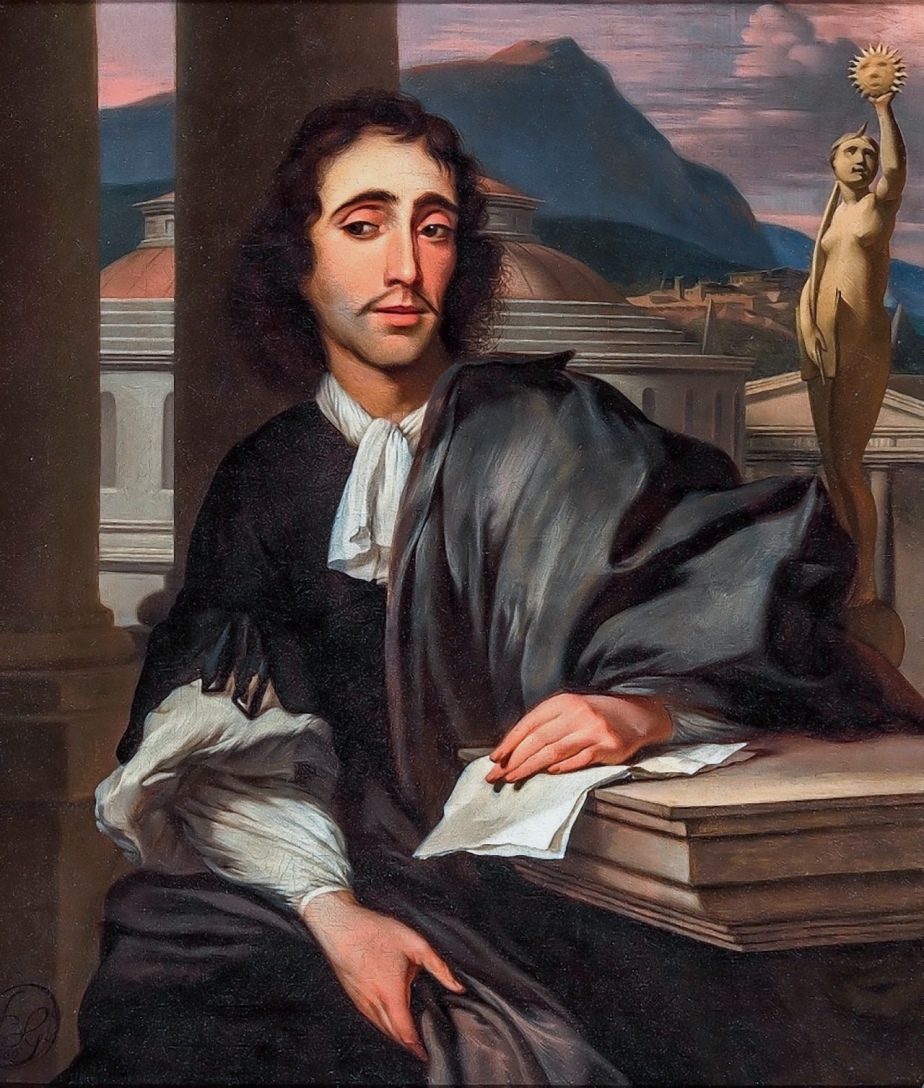 Baruch Spinoza (1632-1677) born Benedito de Espinosa was a Jewish-Dutch philosopher of Portuguese Sephardi origin. By laying the groundwork for the Enlightenmentand modern biblical criticism,including modern conceptions of the self and the universe, he came to be considered one of the great rationalists of 17th-century philosophy. Along with René Descartes, Spinoza was a leading philosophical figure of the Dutch Golden Age. Spinoza’s given name, which means “Blessed”, varies among different languages. In Hebrew, it is written ברוך שפינוזה. His Portuguese name is Benedito “Bento” de Espinosa or d’Espinosa. In his Latin works, he used Latin: Benedictus de Spinoza.

“As to the view of certain people that I identify god with nature (taken as a kind of mass or corporeal matter), they are quite mistaken”

When Spinoza wrote “Deus sive Natura” (“God or Nature”) Spinoza meant God was Natura naturans not Natura naturata, that is, “a dynamic nature in action, growing and changing, not a passive or static thing.”  One might best understand Spinoza by examining Bertrand Russell’s commentary of his beliefs from 1910:

“Spinoza, more than any other modern philosopher, writes always with a strong sense of the importance of philosophy in the conduct of life, and with a firm belief in the power of reason to improve men’s conduct and purify their desires. Like many men of great independence of mind, he feels the need of something great enough to justify him in submitting to its authority. Like all who contemplate human life without sharing its baser passions, he is oppressed by the endless strife produced by conflicting aims and unrestrained ambitions. Believing, as he does, that self-preservation is the very essence of everything that exists, he sees no end to strife except by persuading men to choose as their ends things which all may enjoy in common. Contempt and moral condemnation stand in the way of toleration; he therefore sets out to prove that what men do they do from a necessity of their nature. As well might one condemn a triangle for not having made the effort to increase its angles beyond two right angles as condemn men for being what their nature makes them. His theory of the emotions, in which, by his geometrical method, he demonstrates that men must act in ways which it is common to condemn, contains much admirable psychology; but it was not this that made him value his theory: what he valued was the conclusion that moral condemnation is foolish. It is for this reason partly that Spinoza inveighs against free-will and finds pleasure in showing the necessity of everything. But there is also another reason: what is transitory, though it may be tolerated, cannot be worshipped; but the proof of its necessity connects it with the Divine nature, and thereby removes its pitifulness. To a certain type of mind there is something sublime about necessity: it seems that in the knowledge of what is necessary we place ourselves in harmony with what is greatest in the universe. This constitutes, to those who feel it, a great part of the value of mathematical demonstration; even Spinoza’s geometrical method, which has been almost universally condemned, will be held appropriate by those who know the “intellectual love of God.”

“He who loves God,” Spinoza says, “cannot strive that God should love him in return.” Goethe, in a passage of characteristic sentimentality, misquotes this proposition in singling it out for special praise; he quotes it as, “Who loves God truly must not expect God to love him in return,” and regards it as an example of “Entsagen sollst du, sollst entsagen.” If Goethe had understood Spinoza’s religion, he would not have made this mistake. Spinoza, here and elsewhere, is not inculcating resignation; he himself loved what he judged to be best, and lived, so far as one can discover, without effort in the way which he held to be conformable to reason. There seems to have been in him, what his philosophy was intended to produce in others, an absence of bad desires; hence, his nature is harmonious and gentle, free from the cruelty of asceticism, or the monkishness of the cloister, or the moralistic priggery of Goethe’s praises. “He who clearly and distinctly understands himself and his emotions,” Spinoza says, “loves God, and loves Him better the better he understands himself and his emotions.” It is through the love of God that we are freed from bondage to the passions, and that our minds become in some degree eternal. “God loves Himself with an infinite, intellectual love,” and “the intellectual love of the mind towards God is the very love with which He loves Himself.” Hence, though immortality in the ordinary sense is an error, the mind is nevertheless eternal in so far as it consists in the intellectual love of God. To represent such a philosophy as one of renunciation is surely to miss the whole of the mystic joy which it is intended to produce, and to misunderstand the reconciliation of the individual with the whole, which is the purpose of so much elaborate argument.

Spinoza’s ethical views are inextricably intertwined with his metaphysics, and it may be doubted whether his metaphysics is as good as is supposed by followers of Hegel. But the general attitude towards life and the world which he inculcates does not depend for its validity upon a system of metaphysics. He believes that all human ills are to be cured by knowledge and understanding; that only ignorance of what is best makes men think their interests conflicting, since the highest good is knowledge, which can be shared by all. But knowledge, as he conceives it, is not mere knowledge as it comes to most people; it is “intellectual love,” something coloured by emotion through and through. This conception is the key to all his valuations.”

The concept of a personal relationship with God comes from the position that one is a part of an infinite interdependent “organism.” Spinoza argued that everything is a derivative of God, interconnected with all of existence. Although humans experience only thought and extension, what happens to one aspect of existence will affect others. Thus, Spinozism teaches a form of determinism and ecology, and uses these as a basis for morality.

A core doctrine of Spinozism is that the universe is essentially deterministic. All that happens or will happen could not have unfolded in any other way. Spinoza claimed that the third kind of knowledge, intuition, is the highest kind. More specifically, he defined intuition as the ability of the human intellect to intuit knowledge based upon its accumulated understanding of the world.  Spinoza’s metaphysics consists of one thing, Substance, and its modifications (modes). Early in The Ethics Spinoza argues that there is only one Substance, which is absolutely infinite, self-caused, and eternal. Substance causes an infinite number of attributes and modes.  He calls this Substance “God”, or “Nature”. In fact, he takes these two terms to be synonymous (in the Latin the phrase he uses is “Deus sive Natura”), but readers often disregard his neutral monism. During his time, this statement was seen as literally equating the existing world with God – for which he was accused of atheism. Spinoza asserted that the whole of the natural universe is made of one Substance – God or Nature – and its modifications.

Spinoza’s doctrine was considered radical at the time he published, and he was widely seen as the most infamous atheist-heretic of Europe. His philosophy was part of the philosophic debate in Europe during the Enlightenment, along with Cartesianism. Specifically, Spinoza disagreed with Descartes on substance duality, Descartes’ views on the will and the intellect, and the subject of free will.