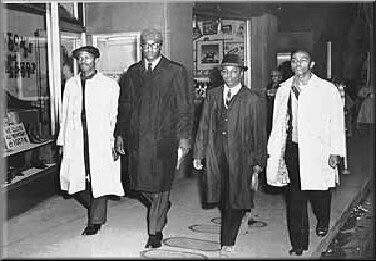 Today in 1960 – Four black students stage the first of the Greensboro sit-ins at a lunch counter in Greensboro, North Carolina.

Here are the four brave students at North Carolina Agricultural and Technical College who, adopting the now-obsolete nonviolent tactics of Gandhi, sat quietly at the white part of the lunch counter while they were reviled. There were no arrests, and students kept coming every day, swelling the seated and then spreading to other segregated facilities. Four years later, the Civil Rights Act declared such segregation illegal.