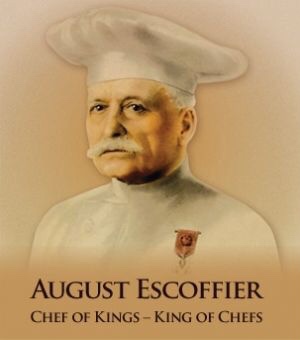 “The art of cuisine is perhaps one of the most useful forms of diplomacy.”
~ Auguste Escoffier

On October 28, 1846 one of the most important French chefs the world has ever known was born Georges Auguste Escoffier. He modernized and simplified the French culinary system. Among his achievements was codifying the five mother sauces of French cuisine. He also instituted a military hierarchy into the kitchen, a system that is followed to this day worldwide with few changes. This brigade de cuisine is a structured team system which delegates different responsibilities to different team members who specialize in certain tasks.

Escoffier began his apprenticeship aged 12 at his uncle’s restaurant in Nice, France. At 19 he moved to Paris and continued his apprenticeship. He was the first great chef that worked his entire career in the public sphere, as opposed to working for royalty. Among his customers were kings, heads of state, and stars on the London and Paris opera. He became known as, “the chef of kings and King of chefs”.

His belief, “above all, keep it simple,” led to him revolutionizing cuisine and a gastronomic philosophy of highly refined simplicity. Escoffier established sanitation standards that up until that point had been unheard of in the kitchen. He was an expert in food science of the time as well as preservation. He was one of the first to develop bottled sauces for the homemaker. Escoffier was dedicated to the belief that food service professionals should improve their skills through education. He wrote multiple books to this effect including Le Guide Culinaire.

The brigade system was instituted in the 19th century at London’s Savoy Hotel. The size and scope will vary according to the size of the kitchen and the establishment. In a large hotel kitchen, especially during Escoffier’s age, a brigade would consist of the following:

Executive Chef – An administrator in charge of all kitchen operations including menu planing, costing and scheduling.
Chef de Cuisine – A active cook who works in the kitchen during preparation periods as well as service. Also responsible for ordering and other administrative duties.
Sous Chef – Second in command under the chef de cuisine. Supervises all the cooks. Oversees the preparation of food and service in the chef de cuisine’s absence.
Chef de Partie – In charge of a specific station.
Commis – Assistants to the chef de partie.
Apprentice – Assists the commis. Common in Europe.