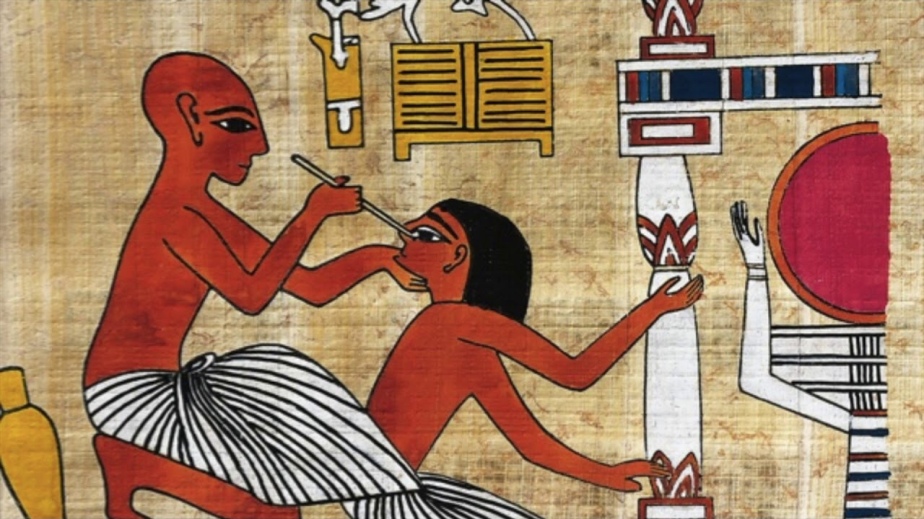 Ancient Egyptian medicine was arguably the most advanced of its time. Natural and supernatural remedies were used together by practitioners/priests in order to cure injury, illness, and disease. Evidence of different diagnoses and treatments have been found on numerous papyri, giving details of both natural and supernatural cures for different ailments. These texts were organized from sections of the body, or focused on one form of treatment. Some of the most known of these are the Edwin Smith Papyrus describing cases of surgical procedures, the Ebers Papyrus which contains multiple natural remedies along with incantations, and the Domotic Magical Papyrus of London and Leiden describing incantations and magical processes (which show similarities to Greek papyri).

From symptoms, a diagnoses was found in order to treat ailments with natural treatments. Depending on the diagnoses numerous remedies would have been used. Medications were herbal/plant, mineral, or animal based. Castor oil was a very popular remedy for many ailments of all types. Honey was also used often, especially for wounds as a natural antiseptic. Some remedies were used domestically as pesticides to ward off insects and animals. Cosmetic remedies were also used to rid wrinkles, etc. Surgical procedures were not used often, only for broken bones, large wounds, circumcision, abscesses, and of course at death during the removal of organs for mummification. All surgical procedures also included medicines an most likely incantations as well.

The Chester Beatty Medical Papyrus, dated c. 1200 BCE, prescribes treatment for anorectal disease (problems associated with the anus and rectum) and prescribes cannabis for cancer patients (pre-dating the mention of cannabis in Herodotus, long thought to be the earliest mention of the drug). The Berlin Medical Papyrus (also known as the Brugsch Papyrus, dated to the New Kingdom, c. 1570 – c. 1069 BCE) deals with contraception, fertility, and includes the earliest known pregnancy tests. The Ebers Papyrus (c. 1550 BCE) treats cancer (for which, it says, there is no treatment), heart disease, diabetes, birth control, and depression. The Edwin Smith Papyrus (c. 1600 BCE) is the oldest work on surgical techniques.

The Demotic Magical Papyrus of London and Leiden (c. 3rd century CE) is devoted entirely to magical spells and divination. The Hearst Medical Papyrus (dated to the New Kingdom) treats urinary tract infections and digestive problems. The Kahun Gynaecological Papyrus (c. 1800 BCE) deals with conception and pregnancy issues as well as contraception. The London Medical Papyrus (c. 1782-1570 BCE) offers prescriptions for issues related to the eyes, skin, burns, and pregnancy. These are only the papyrii recognized as focusing entirely on medicine. There are many more which touch on the subject but are not generally accepted as medical texts.

Along with natural remedies, the supernatural was equally important. ‘Magic’ (tied more closely to religion) and medicine were effective together in order to heal, which is why practitioners/doctors were also priests. Incantations are extremely prominent and go hand in hand with treatments of all types, which is prominent especially in the Ebers Papyrus. Amulets were also used and worn for protection against illness. Invocations gods such as Isis and other rituals are also noted to heal or ward off sickness, similar to ancient Greek practices.