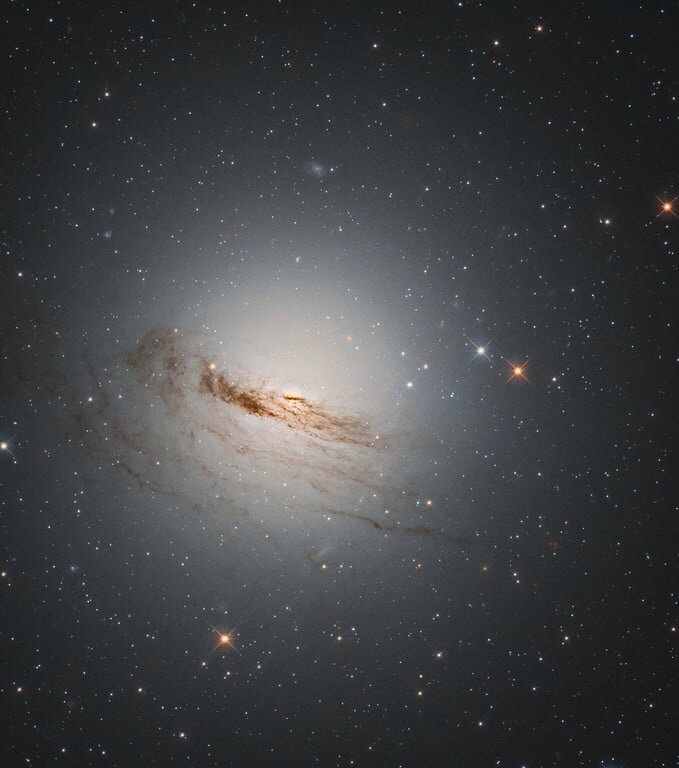 The Hubble Space Telescope has captured a image of a lenticular galaxy called NGC 1947. A lenticular galaxy is one that is neither a spiral galaxy, like our Milky Way, nor an elliptical galaxy, but somewhere in between the two. It has a large disk in the middle but unlike other spiral galaxies, it does not have spiral arms reaching out from its center.

This galaxy wasn’t always this way, however. At a point in its past, it did have spiral arms. You can see the evidence of these arms in the swirls of dust which still surround it, as the European Space Agency writes: “the faint remnants of the galaxy’s spiral arms can still be made out in the stretched thin threads of dark gas encircling it.”

Another difference between lenticular galaxies like NGC 1947 and other kinds of galaxy is the rate of star formation. Galaxies like the Milky Way continue to form new stars, especially in their spiral arms, as clouds of dust and gas clump together and are eventually bound by gravitational forces. In lenticular galaxies, however, there is very little star formation. These galaxies have used up most of their interstellar matter so there is not enough material for the formation of many new stars.

This means that the average age of stars in NGC 1947 is getting older, and the galaxy is fading over time. To see the galaxy for yourself, you’d need to be located in the southern hemisphere as it is further south than the celestial equator.