This month in Holocaust History:

Voyage of the St. Louis

The passenger liner St. Louis set sail from Germany to Cuba with more than 900 Jewish refugees on board in May 1939. When the ship reached Havana, Cuban officials allowed fewer than 30 passengers to disembark, because only they had valid landing permits. The rest had unknowingly purchased fraudulent landing permits from a corrupt Cuban government official. After failing to get permission to enter Cuba or the United States, the refugees were forced to return to Europe on June 6, where the Netherlands, France, Belgium, and the United Kingdom took them in.

All of these countries, except the United Kingdom, were later occupied by Nazi Germany, and more than 250 St. Louis passengers were killed in the Holocaust.

The United States Holocaust Memorial Museum (USHMM) leads the nation in observing Days of Remembrance, established by the US Congress as the country’s annual Holocaust commemoration. Join our nation and a global community to honor Holocaust survivors, remember the six million Jews murdered, and pay tribute to American soldiers who liberated victims.

Despite a year when they faced loss and isolation, Holocaust survivors continue to rise to the challenge of educating by sharing their experiences, compelling us to confront an alarming rise in antisemitism, Holocaust denial, and extremist ideology. Their resilience and courage inspire us to create a better future than the past.

This year’s commemoration featured remarks from US Secretary of State Antony J. Blinken, who has spoken of the importance of Holocaust remembrance and the personal impact of his family’s experience. His stepfather survived the Holocaust after several years in Auschwitz and other camps, was liberated by American soldiers, and immigrated to the United States.

As United with Israel website notes, the picture below was taken in 2015 at the entrance to Auschwitz by Miriam Ciss, daughter of Julius Ciss, the executive director of Jews for Judaism, Canada. It shows Miriam holding the Israeli flag at the entrance through which so many doomed Jews (and gays, Romas, and so on) passed. The photo could be seen as a statement that the state of Israel was a result of what happened during the Holocaust.

If you find that offensive, there’s probably something wrong with you. But Facebook did!

Ciss has given permission to repost what he wrote on Facebook, presenting Facebook’s response to the picture:

Last week I posted the following regarding how Facebook had tagged the attached photo as “insensitive”:

“It seems that someone complained to Facebook about this previously posted photo of my daughter at Auschwitz Concentration Camp. When I posted it, I stated:

“My daughter, Miriam Ciss, was in Auschwitz Concentration Camp today. My mother Helena and Aunt Dolly survived Auschwitz Birkenau. This is just one of the amazing photos she took. Shabbat Shalom and Happy Passover.

“What I didn’t say was that aside from my parents and aunt, the Nazis murdered both my father’s and mother’s entire families.

“Well, today I received the following notice from Facebook: ‘Your photo wasn’t removed because it doesn’t violate our community standards, but it has been marked as insensitive because it could offend or upset people.’

I don’t know what that means, except that someone must have complained, and some functionary of Facebook in some country must have agreed with the assessment.  Fortunately, people complained about the “insensitive” label and Facebook apologized this way:

“It has come to our attention that a piece of your content was mistakenly flagged by one of our reps. This was a mistake and we’ve reversed the action taken. We apologize for our error.” – Eleanor, Community Operations, Facebook

Primo Levi, who survived Auschwitz, and wrote the moving book If This is a Man about his experience, said of the Holocaust: “It happened, therefore it can happen again. . . It can happen, and it can happen everywhere.” I am not as pessimistic as he, but neither am I as certain as I used to be that we’ve moved beyond the possibility, at least in the West, that such a genocide could recur.

Supreme Allied Commander Dwight D. Eisenhower had studied his World War II enemy, he was unprepared for the Nazi brutality he witnessed at Ohrdruf concentration camp in April 1945. Bodies were piled like wood and living skeletons struggled to survive. On International Holocaust Remembrance Day, learn how Eisenhower foresaw a day when the horrors of the Holocaust might be denied and hear about his vigilance to preserve its truth…

Today in Holocaust History –> On this day 17 January 1945, Righteous Among the Nations, Raoul Wallenberg was taken away by Russian soldiers. He was never seen again.

Just prior to the Soviet army entering Budapest, Wallenberg said to his colleague in the Swedish embassy:

“I’ve taken on this assignment, and I will never be able to go back to Stockholm without knowing … that I’d done all a man could do to save as many Jews as possible”.

~ Raoul Wallenberg, Righteous Among the Nations

Raoul Wallenberg was sent to Budapest in 1944 to rescue Jews with connections to Sweden. He arrived with a list of Jews whom he was to help and 650 protective passports. However, he quickly widened the scope of his efforts by issuing 1000’s of “protective letters” and setting up a network of protective houses for Jews .

As the situation in Hungary deteriorated, Wallenberg abandoned all diplomatic protocol and attempted to rescue as many Jews as he could at great risk to himself.

Wallenberg used unconventional methods, including bribery and blackmail, to finance and run his huge rescue operation, successfully saving thousands of Jews. When Adolf Eichmann ordered a “death march” of tens of thousands of persons to the Austrian border, Wallenberg followed the marchers in their vehicles, and distributed food, clothing, and medications. He was able to free Jews from the death march by claiming that they were his “protected” Jews.

In 1956, 11 years after his disappearance, the Soviets finally stated that Raoul Wallenberg had died in prison in 1947.

In 1963 Yad Vashem recognized Raoul Wallenberg as Righteous Among the Nations. 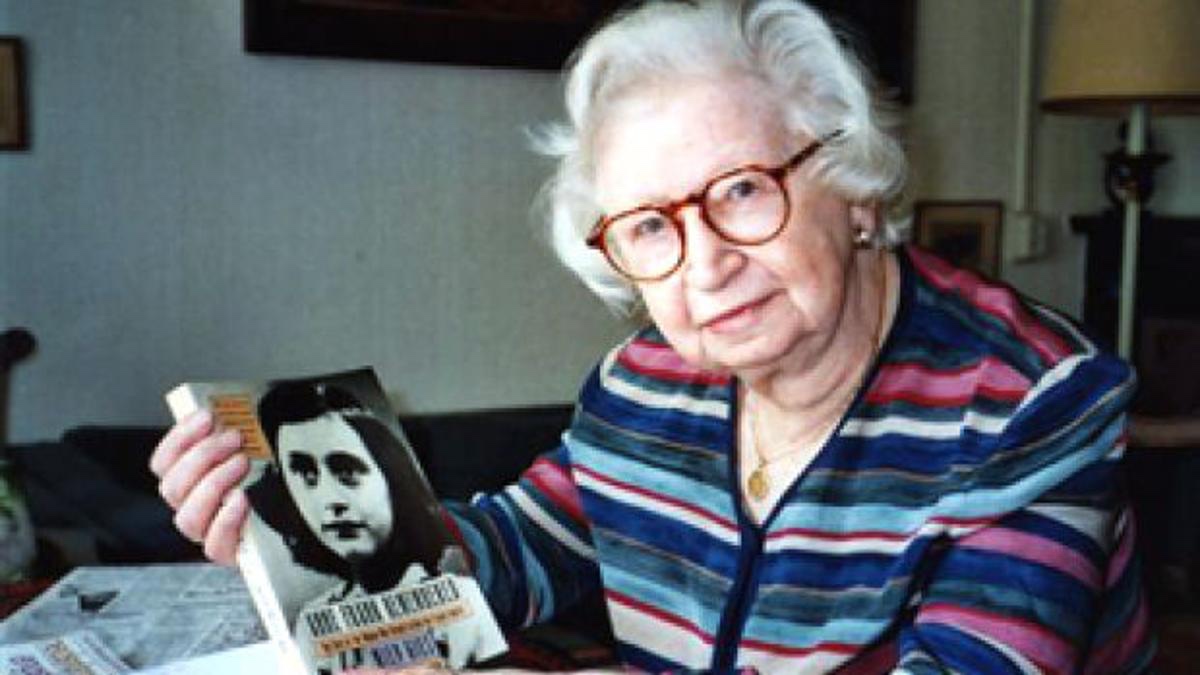 Today in History –> On this day in 2010, Miep Gies, the last survivor of a small group of people who helped hide a Jewish girl, Anne Frank, and her family from the Nazis during World War II, dies at age 100 in the Netherlands. After the Franks were discovered in 1944 and sent to concentration camps, Gies rescued the notebooks that Anne Frank left behind describing her two years in hiding. These writings were later published as “Anne Frank: The Diary of a Young Girl,” which became one of the most widely read accounts of the Holocaust.

Did you know that the beloved character Paddington Bear was inspired by Jewish children who escaped the Holocaust on the Kindertransport? Creator Michael Bond (1926-2017) was motivated by his memories of children arriving at London’s Reading station during WWII. These young refugees each carried a small suitcase and wore labels around their necks to identify them. It’s no coincidence that in the book, the little bear is found sitting on his suitcase in Paddington Station in London with a note around his neck that reads, “Please take care of this bear. Thank you.” He is discovered and adopted by the Brown family, thus the name Paddington Bear. In the story, Paddington’s best friend is Mr. Samuel Gruber, an elderly Jew from Hungary who escaped the Nazis. ❤️

Memorial sculptures at Miami Beach, Florida. Statues by artist Kenneth Treister, on display as part of a memorial depicting thousands of victims crawling into an open hand representing freedom.