Marking 80 years to the Murder of the Jews at Babi Yar:

On 29-30 September 1941, approximately 33,771 Jewish men, women and children from Kiev and the surrounding areas were murdered at Babi Yar by Einsatzgruppe soldiers (mobile killing units) with the assistance of local collaborators. Jews who managed to escape the massacre in September but were discovered in the ensuing months, were also brought to Babi Yar and murdered.

Yad Vashem (Israel Holocaust Museum & Memorial) has 80 photos and stories of the Jews murdered at Babi Yar and now an online special exhibit on their website.

The photos were submitted to Yad Vashem together with Pages of Testimony containing the names and brief biographical information of the victims. Each Page is a mute testament to the persecution of an entire Jewish community: Rabbis, teachers and pupils, traders and artisans, philosophers and scientists- and in many cases entire families.

In this moving exhibit we can see the faces and explore the stories of 80 of the Jewish men, women and children who were murdered 80 years ago at a ravine called Babi Yar.

Treblinka was one of the three death camps that were part of “Operation Reinhard”. It was built as the place of execution for the Jews of the Warsaw Ghetto and its surroundings. It was located near Malkinia, about 80 kilometers north-east of Warsaw. Malkinia was a station on the main Warsaw-Bialystok railroad line in a densely populated area and hidden among deep woods. Jewish and Polish prisoners worked in a punishment camp called Treblinka 1 built as early as 1941. When the extermination camp was built in 1942, the railroad line was extended into it.

“Operation Reinhard” was the code name for “the final solution to the Jewish question” (the extermination of all the Jews) in the areas in Poland under the jurisdiction of the General Gouvernment in the Belzec, Sobibor and Treblinka camps. Several months after work began, the name was suggested in memory of Reinhard Heydrich, head of the SD (The Security Police of the SS) and one of the architects of the “final solution to the Jewish question”, who was shot to death by Czech Underground fighters in May of 1942.

The camp was built in the shape of a polygon, 400 x 600 meters. It had a double barbed wire fence. The inner fence was entwined with branches designed to hide the camp and what was happening there. There were 8 meter high guard towers in each corner and all along the fences.

The living quarters, which included those of the staff (Germans and Ukrainians), offices, the infirmary, storage buildings and workshops. A separate fenced-in area housed the Jewish prisoners’ barracks, sewing shops, a shoemaker and a carpentry shop.

The reception area included the train platform and tracks for shipments, two huts in a fenced-in area where the victims were ordered to undress, and two buildings where the victims’ possessions were kept and sorted. The extermination area was small, only 200 x 250 meters, with a white building which held three gas chambers. There was a diesel motor housed in a building nearby. The victims were executed by carbon monoxide gas that was forced into the chambers through a pipe connected to the roof and into regular shower heads, in order to sustain the illusion of a real shower. One hundred and fifty yards away to the east, were large pits for burying the victims. Between the “reception area” and the “extermination area” there was a narrow path surrounded by wire and intertwined with branches, called “the Pipe,” or “The Way to Heaven”, used by the staff and prisoners (“Himmelfahrtstrasse”). The naked victims were led along here from the undressing huts into the gas chambers.

There were 20-30 SS guards in positions of command and organization and about 90-120 Ukrainians. These were Soviet prisoners of war who volunteered to serve the Germans. They acted as guards and assisted in operating the gas chambers. The 700-1,000 Jewish prisoners did all the work in the camp. They were divided into work groups or “Kommandos”. The uniforms of each Kommando unit had a stripe of a designated color which distinguished them from one another. The exterminations began on July 23, 1942 and continued until April 1943.

From the spring of 1943 only a few transports arrived and then began the burning of the bodies that had been buried in mass graves. Hundreds tried to escape from the trains, most of whom were murdered by the guards. In the early years, before stringent guarding arrangements were established, a few Jews managed to escape from the camp. From time to time there were incidents of Jewish uprisings and from early 1943, an underground existed comprised of prisoners from all parts of the camp.

There was an uprising on August 2,1943, when the last of the bodies had been burned and the camp destroyed, indicating that soon the remaining prisoners would be executed. During the uprising most of the camp burned. The remaining prisoners were ordered to take the buildings and fences apart and try to erase signs of the crimes committed there. When the work was done, everyone was shot. The camp was plowed over, and trees were planted. A farm was established and Ukrainians settled there. About 70 of those who managed to escape from the camp during the uprising survived until the end of the war. 800,000 people were murdered at Treblinka; 2000 of them were Gypsies and most of the rest were Jews. The Jews came from Warsaw, Bialystok, Grodno, Radom, Czenstochowa and even Lublin. Jews from Theresienstadt were also executed there. As the Red Army approached, even the farm that had been established on the camp site was plowed over.

In 1964 the Polish authorities established a stone memorial site, built on the camp ground. A stone pathway leads up to a stone gate on the spot where it is believed that the entrance to the camp stood. The story of the camp is told in several languages on stone plaques. A series of flat stones indicate the railway line that led into the camp and stone pillars mark the camp boundaries. A stone monument at the left of the path which leads to the center of the monument shows the victims last walk – “the Pipe”, the “Shlauch” – of the Jews to the gas chambers. To the right of the path, memorialized in stone, are the names of the places from which the Jews arrived in the transports.

At the heart of the memorial site stands an enormous stone gate that resembles a raised sarcophagus. On one side, the martyrs’ story is told and on the other side there is a menorah, symbol of the Jewish people. Black granite stones symbolize the pits where the victims’ bodies were burned. Six million Jews died in the Holocaust, obliterating the Jewish way of life that had existed for hundreds of years in Europe. Seventeen thousand stones are strewn around the area to symbolize the final resting place of the Jewish world that perished.

The United States Holocaust Memorial Museum (USHMM) leads the nation in observing Days of Remembrance, established by the US Congress as the country’s annual Holocaust commemoration. Join our nation and a global community to honor Holocaust survivors, remember the six million Jews murdered, and pay tribute to American soldiers who liberated victims.

Despite a year when they faced loss and isolation, Holocaust survivors continue to rise to the challenge of educating by sharing their experiences, compelling us to confront an alarming rise in antisemitism, Holocaust denial, and extremist ideology. Their resilience and courage inspire us to create a better future than the past.

This year’s commemoration featured remarks from US Secretary of State Antony J. Blinken, who has spoken of the importance of Holocaust remembrance and the personal impact of his family’s experience. His stepfather survived the Holocaust after several years in Auschwitz and other camps, was liberated by American soldiers, and immigrated to the United States.

As United with Israel website notes, the picture below was taken in 2015 at the entrance to Auschwitz by Miriam Ciss, daughter of Julius Ciss, the executive director of Jews for Judaism, Canada. It shows Miriam holding the Israeli flag at the entrance through which so many doomed Jews (and gays, Romas, and so on) passed. The photo could be seen as a statement that the state of Israel was a result of what happened during the Holocaust.

If you find that offensive, there’s probably something wrong with you. But Facebook did!

Ciss has given permission to repost what he wrote on Facebook, presenting Facebook’s response to the picture:

Last week I posted the following regarding how Facebook had tagged the attached photo as “insensitive”:

“It seems that someone complained to Facebook about this previously posted photo of my daughter at Auschwitz Concentration Camp. When I posted it, I stated:

“My daughter, Miriam Ciss, was in Auschwitz Concentration Camp today. My mother Helena and Aunt Dolly survived Auschwitz Birkenau. This is just one of the amazing photos she took. Shabbat Shalom and Happy Passover.

“What I didn’t say was that aside from my parents and aunt, the Nazis murdered both my father’s and mother’s entire families.

“Well, today I received the following notice from Facebook: ‘Your photo wasn’t removed because it doesn’t violate our community standards, but it has been marked as insensitive because it could offend or upset people.’

I don’t know what that means, except that someone must have complained, and some functionary of Facebook in some country must have agreed with the assessment.  Fortunately, people complained about the “insensitive” label and Facebook apologized this way:

“It has come to our attention that a piece of your content was mistakenly flagged by one of our reps. This was a mistake and we’ve reversed the action taken. We apologize for our error.” – Eleanor, Community Operations, Facebook

Primo Levi, who survived Auschwitz, and wrote the moving book If This is a Man about his experience, said of the Holocaust: “It happened, therefore it can happen again. . . It can happen, and it can happen everywhere.” I am not as pessimistic as he, but neither am I as certain as I used to be that we’ve moved beyond the possibility, at least in the West, that such a genocide could recur. 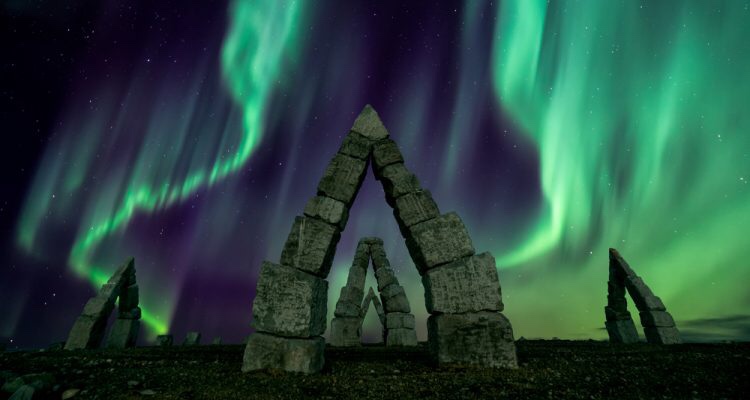 Located in one of Iceland’s most remote northern villages, the Arctic Henge is a colossal piece of stone construction that, when finished, will make Stonehenge look like amateur hour.

Started in 1996, the Arctic Henge project is a monument not only to the country’s nordic roots, but also to some of the neo-pagan beliefs that have arisen in certain areas. The piece was inspired directly from the eddic poem Völuspá (Prophecy of the Seeress), taking from it the concept of 72 dwarves who represent the seasons in the world of the poem, among other symbolic queues. In the Arctic Henge, 72 small blocks, each inscribed with a specific dwarven name will eventually circle four larger stone monuments, which in turn will surround a central balanced column of massive basalt blocks. Each aspect of the deliberate layout corresponds to some aspect of ancient Norse belief and when each piece of the monument is installed, visitors will be able to “capture the midnight sun” by viewing it through the various formations at different vantage points depending on the season.

At current, only the imposing central tri-column and one of the four larger gates have been constructed, along with a smattering of the smaller stones, but it is still a work in progress. When it is complete, the Arctic Henge could easily become the premiere site for Paganism in the entire world and millennia from now it might seem as mysterious as Stonehenge seems to us today.

Memorial sculptures at Miami Beach, Florida. Statues by artist Kenneth Treister, on display as part of a memorial depicting thousands of victims crawling into an open hand representing freedom.