Galileo was born in Pisa, but later moved with his family to Florence. In 1581, he enrolled in the University of Pisa to study medicine, then switched to mathematics and natural philosophy. He investigated many areas of science, and is perhaps most famous for his discovery of the four largest moons of Jupiter (still called the Galilean moons). Galileo’s observations led him to support the Sun-centered model of the solar system, which at the time was in opposition to the teachings of the Roman Catholic Church. In 1633, he was tried and made to recant this and other ideas. He was sentenced to house arrest, which lasted the rest of his life. During his confinement, he wrote a book summarizing his work on kinematics (the science of movement).

The original Renaissance man died 502 years ago (1452–1519), but the nature of his genius continues to fascinate us:

Leonardo’s science was grounded in the Aristotelian world as shaped by 18 centuries of interpreters. He developed a system of what he called the four powers of nature: movement, weight, force and percussion. Although he struggled to define these concepts, and many of the ideas are archaic, it is telling that he developed a coherent model for all natural phenomena ranging from the macrocosm (e.g., geological forces that lead to the formation of rivers and oceans) to the microcosm (e.g., human anatomy).

Famed British biologist Charles Darwin died 139 years ago on April 19. Often dubbed as the “Father of Evolution,” Darwin provided the world with explanations on the origin and evolution of living things on Earth.

Darwin was born on Feb. 12, 1809, in Shrewsbury, England, and was homeschooled with his sister Caroline until the age of 8. He was sent to a boarding school after spending a year at a day school. His father enrolled him to the University of Edinburgh to study medicine. There, he began collecting, hunting, and naturalizing rather than studying medicine, according to Charles Darwin Online.

After graduating in 1831, Darwin accepted a job on the HMS Beagle, a vessel that mapped South America’s coast over a span of two or three years. During the job, he took notes and sent samples and specimens to botanist John Henslow in England. After returning to England after five years on the vessel, Darwin found that his specimen collection amazed Henslow and geologists, zoologists, and botanists.

Darwin’s research during his job on HMS Beagle contributed to the development of theory of evolution and natural selection. He, however, took over 20 years to publish the revolutionary theory — in 1858. He was apparently concerned about the acceptance of his idea. However, the theory turned out to be groundbreaking and was eventually widely accepted in mainstream science.

“The mystery of the beginning of all things is insoluble by us; and I for one must be content to remain an agnostic.”

“We can allow satellites, planets, suns, universe, nay whole systems of universes, to be governed by laws, but the smallest insect, we wish to be created at once by special act.”

“False facts are highly injurious to the progress of science, for they often endure long; but false views, if supported by some evidence, do little harm, for every one takes a salutary pleasure in proving their falseness.”

“At some future period, not very distant as measured by centuries, the civilized races of man will almost certainly exterminate, and replace the savage races throughout the world.”

“A man who dares to waste one hour of his life has not discovered the value of life.”

“The highest possible stage in moral culture is when we recognize that we ought to control our thoughts.”

“It is a cursed evil to any man to become as absorbed in any subject as I am in mine.”

“A man’s friendships are one of the best measures of his worth.”

“A scientific man ought to have no wishes, no affections, – a mere heart of stone.”

“False facts are highly injurious to the progress of science, for they often endure long; but false views, if supported by some evidence, do little harm, for every one takes a salutary pleasure in proving their falseness.”

On this date in 1858, one of the most significant founders of sociology, David Emile Durkheim, was born in Epinal in Lorraine, France. His father, grandfather and great-grandfather were prominent rabbis. Durkheim spent time in rabbinical school but broke with Judaism early in life (Emile Durkheim: An Introduction to Four Major Works by Robert Alun Jones, 1986). Durkheim excelled in school, earning his bachelor in letters and sciences in 1875, two years earlier than normal, from College d’Epinal. He was admitted to the prestigious École normale supérieure in 1879 and passed examinations to become a philosophy lecturer in 1882. He was appointed to the Faculty of Letters at Bordeaux to lecture on the “Science Sociale,” marking the first time sociology officially entered the French university system.

Durkheim founded the Année Sociologique in 1898, the first French social science journal, still in existence. In 1902, Durkheim was appointed chair of education at the Sorbonne in Paris. For a time, his courses were the only lectures required at the Sorbonne. Durkheim believed religion served a unique role in human life, and indeed shaped many social structures, but that its origins were in human society, not from a divine source (“Reasons people choose atheism,” BBC, Oct. 22, 2009). “Frequently described as a ‘secular pope,’ Durkheim was viewed by critics as an agent of government anti-clericalism” (Jones, 1986). Some of his greatest contributions to sociology include: The Division of Labour in Society (1893), Rules of the Sociological Method (1895), On the Normality of Crime (1895), Suicide (1897), Sociology and Its Scientific Domain (1900) and The Elementary Forms of Religious Life (1912). Published posthumously were other important works including Education and Sociology (1922), Sociology and Philosophy (1924) and Pragmatism and Sociology (1955). Overwork and the death of a beloved son in war (in 1916) had severe repercussions on Durkheim’s health. He suffered a stroke and died at the age of 59. He is buried in Paris. D. 1917.

“Religious force is nothing other than the collective and anonymous force of the clan.”
~ Emile Durkheim in The Elementary Forms of the Religious Life, 1912.

Richard Phillips Feynman (May 11, 1918 – February 15, 1988) was an American theoretical physicist known for his work in the path integral formulation of quantum mechanics, the theory of quantum electrodynamics, and the physics of the superfluidity of supercooled liquid helium, as well as in particle physics for which he proposed the parton model. For his contributions to the development of quantum electrodynamics, Feynman, jointly with Julian Schwinger and Sin’ichirō Tomonaga, received the Nobel Prize in Physics in 1965.

Feynman developed a widely used pictorial representation scheme for the mathematical expressions governing the behavior of subatomic particles, which later became known as Feynman diagrams. During his lifetime, Feynman became one of the best-known scientists in the world. In a 1999 poll of 130 leading physicists worldwide by the British journal Physics World he was ranked as one of the ten greatest physicists of all time.

He assisted in the development of the atomic bomb during World War II and became known to a wide public in the 1980s as a member of the Rogers Commission, the panel that investigated the Space Shuttle Challenger disaster. Along with his work in theoretical physics, Feynman has been credited with pioneering the field of quantum computing and introducing the concept of nanotechnology. He held the Richard C. Tolman professorship in theoretical physics at the California Institute of Technology.

Feynman was a keen popularizer of physics through both books and lectures, including a 1959 talk on top-down nanotechnology called There’s Plenty of Room at the Bottom, and the three-volume publication of his undergraduate lectures, The Feynman Lectures on Physics. Feynman also became known through his semi-autobiographical books Surely You’re Joking, Mr. Feynman! and What Do You Care What Other People Think? and books written about him, such as Tuva or Bust! and Genius: The Life and Science of Richard Feynman by James Gleick…

Born in the city of Weil der Stadt near Stuttgart, southern Germany, in 1571, Johannes Kepler witnessed the Great Comet of 1577 as a small child, marking the start of his fascination with the heavens. While studying at the University of Tübingen, he developed a reputation as a brilliant mathematician and astrologer. He corresponded with various leading astronomers of the time, including Tycho Brahe, ultimately moving to Prague in 1600 to become Brahe’s student and academic heir.

Following Brahe’s death in 1601, Kepler took on the post of Imperial Mathematician, with a royal commission to complete Brahe’s work on the so-called Rudolphine Tables for predicting the movements of the planets. He completed this work in Linz, Austria, where he worked from 1612 until his death in 1630. 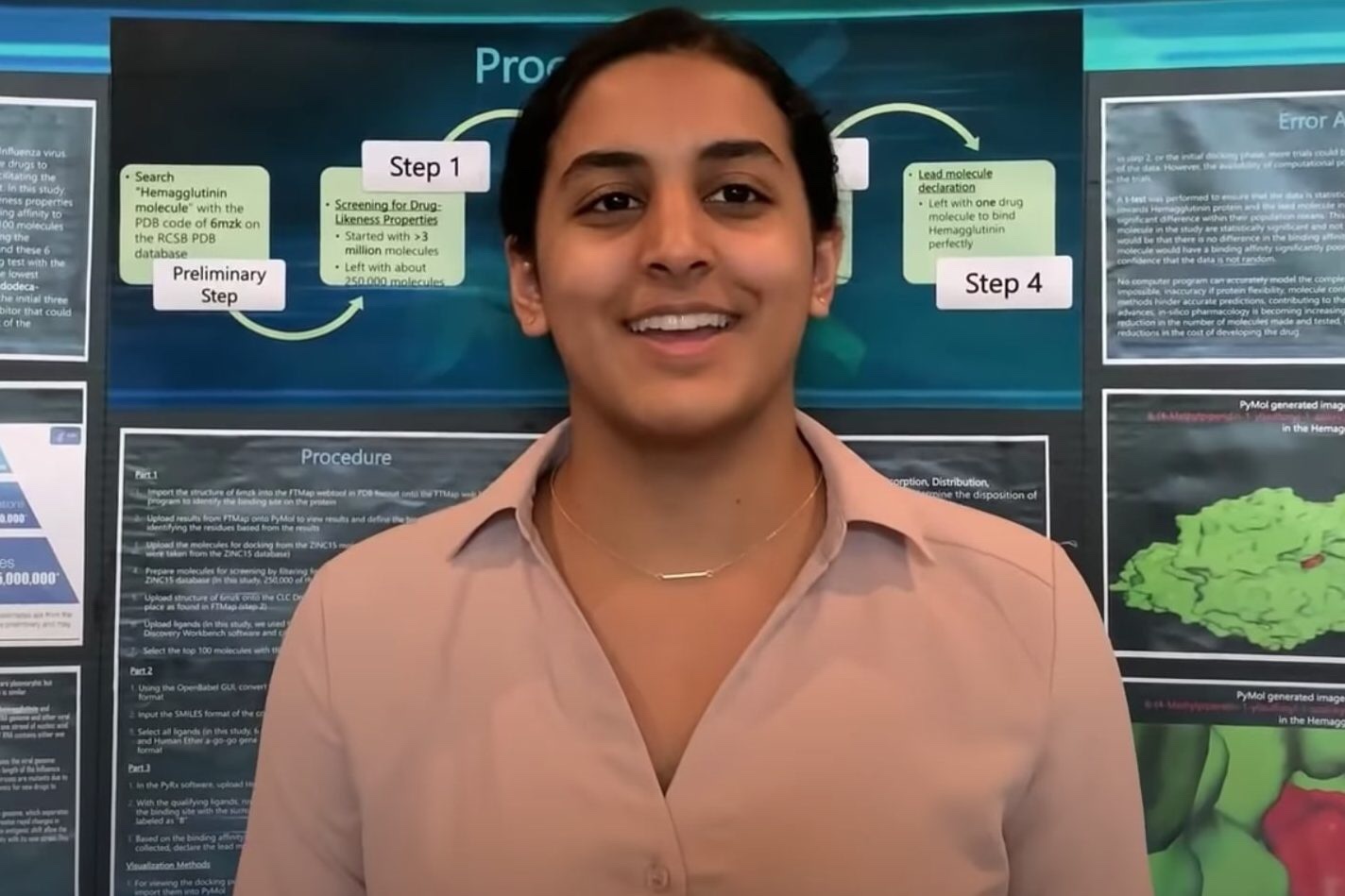 14-year-old Anika Chebrolu was just named the winner of the 2020 3M Young Scientist Challenge, an annual innovation competition hosted in partnership with Discovery Education. The eight-grader from Frisco, Texas earned the ‘America’s Top Young Scientist’ title for using in-silico methods to identify a molecule that can selectively bind to the Spike protein of the SARS-CoV-2 virus in an attempt to develop a potential cure – in the form of a novel antiviral drug – for COVID-19.

When Anika entered 3M’s 2020 Young Scientist Challenge her original goal was to identify a lead compound that could bind to a protein of the influenza virus to develop a novel anti-influenza drug. But she switched gears when the COVID-19 pandemic quickly spread across the globe. In an interview with CNN, the young scientist whose future goal is to be a medical researcher and professor explained, “Because of the immense severity of the COVID-19 pandemic and the drastic impact it had made on the world in such a short time, I, with the help of my mentor, changed directions to target the SARS-CoV-2 virus.”

Of her reasons for entering the Young Scientist Challenge Anika said, “I have always been amazed by science experiments since my childhood and I was drawn towards finding effective cures for Influenza disease after a severe bout of the infection last year. I would like to learn more from 3M scientists to pursue my drug development and with their help, would like to conduct in-vitro and in-vivo testing of my lead drug candidate.”

In taking this year’s top prize, which includes the ‘America’s Top Young Scientist’ title, a $25,000 cash prize, and a one-of-a-kind 2 day/1-night destination trip, Anika competed against nine other finalists.

Today in Science –> In 1642 Italian astronomer Galileo Galilei dies in Italy at age 77. Born February 15, 1564, Galileo has been referred to as the “father of modern astronomy,” the “father of modern physics” and the “father of science” due to his revolutionary discoveries. The first person to use a telescope to observe the skies, Galileo discovered the moons of Jupiter, the rings of Saturn, sunspots and the solar rotation. After Galileo published his confirmation that the Earth orbits the Sun, in favor of the Copernican system, he was charged with heresies (ideas that ran counter to teaching of the church) by the Inquisition—the legal body of the Catholic church. He was found guilty in 1633 and sentenced to life imprisonment but due to his age and poor health he was allowed to serve out his sentence under house arrest.

Notable born on this day in History —> On this date in 1942, cosmologist Stephen Hawking was born in Oxford, England, “300 years after the death of Galileo,” as he points out at his Web site. He attended Oxford, studying physics, then earned his Ph.D. in cosmology at Cambridge. Hawking is celebrated for his work on unifying General Relativity with Quantum Theory.

“All that my work has shown is that you don’t have to say that the way the universe began was the personal whim of God.”

“I do not know what I may appear to the world, but to myself I seem to have been only like a boy playing on the seashore, and diverting myself in now and then finding a smoother pebble or a prettier shell than ordinary, whilst the great ocean of truth lay all undiscovered before me.”